skip to main | skip to sidebar

Death of a shoe

This is what shoes look like when you've put 865+ miles on them. The soles look remarkably good, but the uppers are shredding slowly. There are at least two holes on the left shoe where I can stick my little finger through. The tread is still there, and I can read some of the writing on the soles (in the heel area) never wore down. 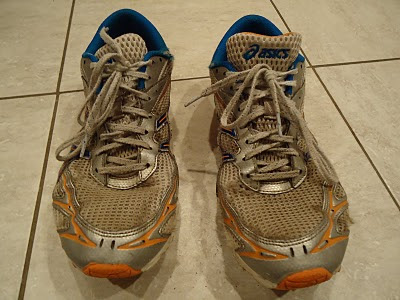 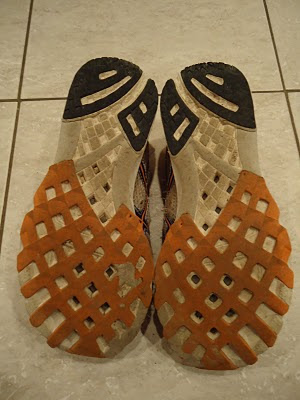 When I bought these back in June of 2009, the salesperson told me that they would last about 150 miles. This back at a time when I was still wearing Asics GT 2140s and still believing that I needed shoes to correct my overpronation (or whatever it was), and that shoes needed to be replaced not when they were incapable of being run in again, but when the interior structure wore down.

And then sometime in 2010, something magical happened. I wore out my GT 2140s and Asics stopped making them. My shoes became the 2140s became 2150s. They got bigger, bulkier and more cloddhopperish. Begrudgingly, I bought a pair.

And I was not impressed. They caused pain in the base of my knee post-run, and my shins never felt right running on them. And for good reason. The shoes were overbuilt, sit many millimeters off the ground, and obnoxiously heavy.

I was forced to do something. I dislike shopping for new running shoes because I see the purchase as an investment. If I can't run in them, the investment was poor and the shoes may be used for general knocking around. But most likely not, because the pain associated with running in the poor investment often translates to walking. So the whole thing becomes a waste of money.

And thus, in the summer of 2010, I did something. I started running in my flats, full time. And soon the miles rolled away. My steps got lighter and quicker because I was no longer burdened with clunky footwear. My form improved, and the phantom knee pain caused by the 2150s went away. Those shoes carried by through my first 50 mile ultra, and I certainly get some weird looks running in tiny shoes all the time. With any luck, they'll last a few hundred more miles and get me through my next 50K.

But my flats are dying. The holes in the uppers will get bigger and shred the mesh. My foot will no longer be neatly encased in them. Feet will slide and cause havoc. They are inching toward retirement, with every mile decreasing whatever distance remains. As of this post, I have run at least 900 miles in them. Who knows how long they will last.

When they are ultimately retired, may they rest in peace.
Posted by Matt Lutz at 12:00 PM

What I run in

Altra Lone Peak 3.0
Lots to love here on an Altra - solid grip, wide toebox with appropriate overall foot volume - something the Superior lacked in all its versions - zero drop, and durability. Current pair has 600 miles on it, and still looks great. Check out Ginger Runner's video review.
Brook's Ghost running shirt
Thin, thin, thin, and it just happened to be in stock at my local store. when I needed to finally get shirts in a size medium. Liked it so much I bought a second for an upcoming 100 miler. We'll see if long-term testing shows wear on it. Regardless, I'm going back to Patagonia Capilene when these expire.

Patagonia Strider Pro 5" inseam shorts
The perfect trail running shorts. Five pockets, including one zippered on the back, make these the perfect shorts for carrying gels, blocks, salt tabs, and other good and goodies. The waist band is thick to give the shorts a good hold on your body (they ride low) and the inseam is long enough to minimize chafing. One hitch: (trail) runners like me who have narrow waists/hips and big thighs may find the liner brief a wee bit too tight on the thighs. Hasn't been an issue for me.

Fitsok Isowool Trail Cuff socks
Combine merino wool and decent elasticity and you get these numbers. These numbers have the bulk and cushioning to fill up the volume of a trail shoe. I also like the minimal compression and tight fit. A bargain over all other wool socks in that they come in packs of three for $25. Extra bonus - they're made in MN.
Patagonia Houdini
The windshirt and lightweight shell. Necessary for overnights on any 100 miler and when training in the winter. Again a venerable piece of clothing.
Ultimate Direction AK 2.0 race vest
The main hydration vest. Having the benefit of non-sloshing weight on the front with the advantage of still being able to carry a windshirt, hat, gloves, etc. - even a bottle or bladder - makes this vest superior my Nathan HPL #020 in 99 percent of situations. Sadly, it looks like UD is no longer making their Fastdraw handhelds with the 20 oz bottles and kicker valves (but they are still making those bottles individually).

Nathan Streak Vest
A must-have for nighttime/early AM running. I safetypin in the sides to shorten the bottom straps around my true waist, and the whole thing stays put.
Rocksteady Running trail buff
The second-most versatile piece of clothing I own, behind only my Patagonia R1 Hoody. Use it as a neck gaiter, headband, hat, etc., alone or in combination with a fleece skullcap. This piece (and my Smartwool neck gaiter) has single handedly improved my colder weather and winter running tolerance. If you run or volunteer at a John Storkamp race in MN, chances are you'll be given one or can pick one up.
Black Diamond Lightweight gloves
The basic (fleece) glove. Thin, and (almost) nothing you don't need (the screen-compatible patches are OK but unnecessary). Before this, I used BD's midweight gloves, which have a leather palm to hold on to whatever - poles, bottles, etc. - and you're good to go. For both types, have reasonable expectations about their durability - I go through a pair every season or two, depending on my other uses for them.
Saucony Running mitts
The mitten. Designed for running with gridded-fleece outers in key spots to wipe snot or frozen breath. Reasonably wind resistant without the bulk or stiffness of something thicker. Smart cuffs to close caps between gloves and shirts and the mitt itself. Buy them a size up so they fit over your liner gloves.

Granite Gear Vapor Trail
I wouldn't call the VT ultralight, per se, but it carries weights under 30 lbs exceptionally well. The secret is the exceptionally padded hipbelt and backpanel, coupled with the polyethylene frame. The pack is bellowed at the bottom to accommodate a winter-weight sleep system, and the exterior straps allow you to attach your sleeping pads and tents. If only they would cut down on the strap lengths so you don't have to do it yourself.

If you only want to one pack, this is it.

ZPacks.com Z1
This frameless suspect is exactly what I look for in a frameless pack. It is a simple rucksack with two side pockets, one rear billowing pocket, and straps. No bells, whistles, or doodads. Bonus points for other hikers confusing me for a so-called "dayhiker," or worse, a "fastpacker."

Ask for this custom made, as apparently ZPacks now features more complicated offerings.

Tarptent DoubleRainbow
This 40 ounce shelter is fantastic for two persons, and it is my go-to shelter when I'm with another person and there is no snow on the ground. There's everything to like: vertical walls, low weight, usable vestibules and massive usable space. Even the venting is decent. One caveat: I almost need to carry my Vapor Trail if this tarptent goes along.

Integral Designs eVENT Shortie Gaiters
If BACKPACKER magazine were going to give awards for simple gear instead of over-worked gear, these gaiters would in an Editor's Choice Gold Award. They are the right height, weigh almost nothing and have a smartly-placed instep patch to prevent abrasion while not skimping on breathability. As their website says, perfection comes not when there is no longer anything to add, but when there is nothing more to take away.

Patagonia R1 Hoody
The best base/midlayer when the temps are south of 40F. Here's what you get: an integrated, balaclava-type hood that holds tight to your neck, long arms with thumb loops to cover gaps, a deep neck zip for venting, an off-set zipper so you don't freeze your chin on the pull, and a long bottom hem to tuck in. And the fabric: it is Patagonia's Regulator Fabric (made of Polartec fleece), which has a gridded interior to facilitate moisture transfer and ventilation.

The gearheads among us